Readers, welcome to the first of two posts in which we will cover several musicians with possible connections to Churches of Christ. Quite a few names have been suggested to me over the last few months, and in order to work through the backlog, I’m going to cover 4-5 in each of the next couple of entries. As always, if you enjoy the blog or have suggestions, let me know, and feel free to share with your friends. Let’s get to it!

Our first possible “Church of Christ Celebrity” is country singer and musician Dwight Yoakam (1956-). Yoakam is best known for his genre-bridging sound, which draws on elements not only of traditional country music but of roots music, rock, and alt-country. As it turns out, Yoakam has acknowledged his upbringing in Churches of Christ in several interviews. In a 2001 conversation with the A.V. Club, he noted that participating in his school’s theater program was his first opportunity to perform publicly while playing an instrument:

I was involved in singing in church, and leading singing, but I was raised in the Church of Christ, and they didn’t use music in worship, so there was no use of the guitar. So it does sort of tie in, in an ironic way, that my involvement in theater in high school allowed me the opportunity to start performing music with a band. (1)

Fifteen years later, Yoakam again referenced his roots in Churches of Christ in an interview with Terry Gross on the NPR program Fresh Air:

Well, the congregation that I was raised in was one that sang and [sic] a non-instrumental fashion. It was all a cappella singing, and so that had a major influence on me. And those songs, I think, shaped to some degree how I would evolve as a writer, pentameter of songs, the melodies of those kind of hillbilly hymns – I used to refer to them – because they were not Southern gospel as much as they were passed down from Scottish Welsh Protestant hymnals. (2)

A Terry Gross interview also provides us the information we need about the second of today’s subjects, Jason Isbell (1979-). Isbell is known for his solo work, his recordings with the 400 Unit, and the time he spent as a member of the Drive-By Truckers in the early 2000s.

In that interview, Isbell recalls an amusing incident when he attended a Churches of Christ worship service with his mother as a child:

The Pentecostal church had a full band, and they were really loud. And, you know, they had like a bass player and a drummer and stuff. And then my mom’s church, you know, you’re forbidden to have musical instruments in the Church of Christ. So it was all voices. You know, I would get those two mixed up in my head every once in a while. And, you know, the Pentecostal church, like when you’re supposed to pray, everybody prayed out loud at once. Everybody just said what they had to say. And then at the Church of Christ, it was very quiet, you know, and that wasn’t the thing. I remember one time I got them mixed up in my head, and when I was at the Church of Christ with my mom, and it was time to pray, I just started yelling. I was probably five or six years old. (3) 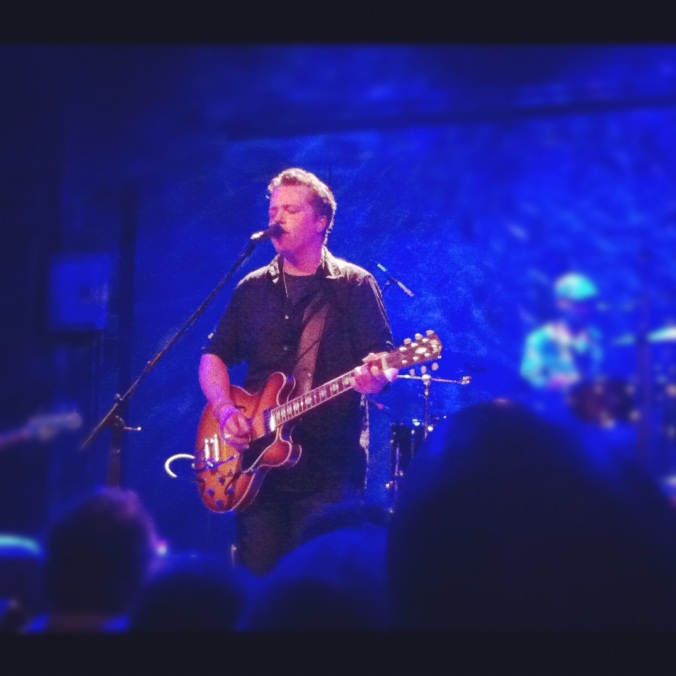 (“Jason Isbell at Bowery Ballroom” by Franzthemogul89 is licensed under CC BY SA-3.0)

Two down, two to go. Our next subject is the up-and-coming country music singer and songwriter Thomas Rhett (1990-), who, from his first three albums, has already achieved nine number one singles. Rhett was a student “at a Church of Christ-affiliated liberal arts school” (Lipscomb University in Nashville, Tennessee) before he dropped out when his musical career took off. (4) And not only was Rhett connected to Churches of Christ via Lipscomb; he was also raised in the group, as he mentioned while discussing the controversy surrounding one of his songs:

The core complaint with ‘Beer With Jesus’ lies in the direct conflict between religion and alcohol, a dichotomy that is distilled in most major Christian belief systems. Rhett acknowledges that the track even conflicts with his own upbringing as member of a predominant religious group. “I grew up Church of Christ,” the singer-songwriter spills. “You’re taught that beer is wrong and alcohol is wrong.” (5)

And finally, we move to the genre of R&B for our last subject du jour, Brandy Norwood (1979-), better known as Brandy–or, perhaps, as the star of the hit sitcom Moesha. The recipient of a Grammy for Best R&B Vocal Performance By a Duo or Group with Vocals for her hit “The Boy Is Mine,” Brandy appears frequently on lists of celebrities with roots in Churches of Christ, and as with today’s other featured artists, the connection is authentic.

According to his professional website, Brandy’s father, Willie, is currently the minister of music at the Woodland Hills Church of Christ, (6) and in a 2004 feature in Vibe, the singer’s religious upbringing makes a brief appearance:

When Brandy Rayana Norwood entered the world on February 11, 1979, in McComb, Miss., she was considered a “miracle” child born to a couple who desperately wanted a baby. She sang her first church solo at 2. By 7, she told her father–a minister of music for the Los Angeles-based Southside Church of Christ–she wanted to be the next Whitney Houston. (7)

That draws our discussion to a close for now; thanks for reading all the way to the end. Check back in a couple of weeks for the second part of our Musician Extravaganza!

(4) Jewly Hight, “Inside Country Music’s Conflicted Relationship With Religion: With country in the midst of a never-ending keg party, how does a genre rooted in God keep its Savior in the mix?” Rolling Stone, May 11, 2015, accessed February 22, 2018, https://www.rollingstone.com/music/features/inside-country-musics-conflicted-relationship-with-religion-20150511.

One thought on “20. Musician Extravaganza, Part One”