Hello and welcome back (after an extended break) to the “Church of Christ Celebrities” blog! I’m excited about the upcoming slate of posts, and I hope you’re looking forward to them as well. As always, if you have questions, comments, or topic suggestions, I’d love to hear from you over at the Contact page. Feel free to share on the social media platform of your choice so that people will know that we’re back in action here.

As of today, we are only four weeks away from the start of the college football season, and so it seems fitting to start the new round of posts with an entry focusing on four gridiron gladiators: former Texas quarterback Colt McCoy, former Alabama players Tyler Watts and D.J. Fluker, and former Auburn, Texas Tech, and Cincinnati coach Tommy Tuberville. 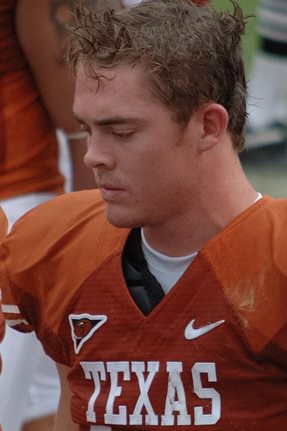 (“McCoy on the sidelines during the home loss to Kansas State” by Jeff Arredondo is licensed under CC BY 2.0)

First up is Colt McCoy. McCoy played for the University of Texas from 2005-2009, redshirting during the Longhorns’ 2005 championship season and then leading them back to the BCS title game in 2009. A Heisman finalist that season, McCoy was selected in the third round of the 2010 NFL Draft by the Cleveland Browns, and has since played for the San Francisco 49ers as well as his current team, the Washington Redskins.

McCoy’s ties to Churches of Christ have been thoroughly documented, particularly by the Christian Chronicle. A 2010 article mentions that McCoy’s wedding took place at the Westover Hills Church of Christ in Austin, Texas, (1) and another piece from the previous year describes his significant involvement with that same congregation. The interview also notes that Colt’s younger brother, Chance, was (at the time) completing his studies at Abilene Christian University, a school affiliated with Churches of Christ. (2) Nor do the connections stop there. In 2008, the Chronicle ran a story highlighting the eerie similarities between McCoy and rival Big 12 quarterback Graham Harrell of Texas Tech. As the author notes, both quarterbacks were raised in Churches of Christ, their parents met at ACU, and they each had a brother currently playing football at ACU. (3)

Moving on, Tyler Watts quarterbacked for Alabama from 1999-2002, starting for the Crimson Tide beginning in 2000 (though he was also involved in a heated QB competition with Andrew Zow for part of that time). The early 2000s were, of course, difficult years for the Tide, in no small part due to turnover at the coaching position and ongoing NCAA sanctions. The team did finish first in their division in 2002, however, in what surprisingly turned out to be coach Dennis Franchione’s final year in Tuscaloosa. (4) At any rate, documentation about Watts’s religious affiliation is hard to come by, and I was unable to find any sources one way or the other. I can personally attest, though, that I heard him speak at the Florence Boulevard Church of Christ back when I was in high school. (5)

Next up, D.J. Fluker played on the offensive line at Bama from 2009-2012, which were certainly more successful years for the Tide. Fluker, an Alabama native, was taken by the San Diego Chargers in the first round of the 2013 draft, and has since spent time with the New York Giants and Seattle Seahawks. As with Watts, I was unable to find any sources about Fluker’s supposed connection to Churches of Christ, though I do remember hearing rumors to that effect while I was an undergrad at UA. (Readers, if any of you know anything else, I would love to hear it in the comments!)

Last but not least, Tommy Tuberville coached for a number of college teams during his career, most successfully at Auburn, where he led the Tigers to six straight victories over their archrival Alabama from 2002-2007. Tuberville has since appeared on ESPN as a commentator and is occasionally floated as a possible candidate for various statewide political offices in Alabama. Fortunately, we have more sources to go on regarding Tuberville’s connection to Churches of Christ. A 2010 Christian Chronicle report links to an interview Tuberville did with the Lubbock Avalanche-Journal (no longer available online, however) in which he spoke about his upbringing in Churches of Christ. Tuberville is also described in the report as having been “an active member of the Auburn, Ala., church” when he coached there. (6) Similarly, a 2014 Cincinnati Enquirer article highlights Tuberville’s spirituality and mentions that he “grew up in Camden, Arkansas in the Church of Christ…” (7)

That’s all for today; thanks for reading, and I hope you will join us again in two weeks as we go hunting (hint, hint) for some of the most well-known celebrities in recent Churches of Christ history.

(5) I remember the evening vividly because there were WAY too many of us crammed in our congregation’s van–a prerequisite for youth group trips, of course.

One thought on “24. Football Frenzy”