Readers, we’ve made it to another landmark–thirty entries at the “Church of Christ Celebrities” blog! Thanks for sticking around for this project that I originally started on little more than a whim; it’s become much more popular than I could have dreamed, and I hope that it’s been a fun (and, perhaps, useful) resource for you. Too, in case you missed it, be sure to check out our previous post as well–I posted it earlier in the day than usual, and recent changes on Facebook have made it harder for blog posts and similar content to show up on others’ newsfeeds.

The subject of today’s post, Ken Starr (1946-), has been in the news quite a bit within the last few years, though not always in a positive fashion. Starr is a former U.S. circuit judge and university administrator best known for his prominent role in the Whitewater investigation and subsequent impeachment of President Bill Clinton. Since then, Starr has spent time as dean of Pepperdine University School of Law–Pepperdine, of course, being affiliated with Churches of Christ–and as president and chancellor of Baylor University. However, Starr resigned from Baylor in 2016 after an investigation into the school’s failure to properly respond to sexual assaults committed by football players. (Most recently, Starr has once again been the subject of some discussion because of the nomination of his protege Brett Kavanaugh to the Supreme Court.)

As noted above, Starr previously served as dean of Pepperdine University’s law school. Is that the extent of Starr’s connection to Churches of Christ, or is there more to the story? 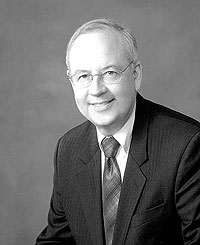 The answer is somewhat complicated. An article in the Chronicle of Higher Education, written in the context of Starr’s move to Baylor University, notes that Starr “grew up in the Churches of Christ, in which his father was a pastor. And he began his undergraduate career at Harding College (now Harding University), a Churches of Christ institution in Arkansas…” (1) Starr and Churches of Christ certainly go way back, then–but what of his religious affiliation later in life?

The same article in the Chronicle notes that despite his connection to Pepperdine and his history in Churches of Christ, Starr considered McLean Bible Church (located in Virginia) to be his home congregation. Furthermore, the author writes, “Mr. Starr said he would join a Baptist church if he got the position [at Baylor], but the committees had lots of questions about his faith.” (2) Some within Churches of Christ had concerns, too; an article in the Christian Courier noted Starr’s connection to the McLean congregation and sought to distance him from Churches of Christ. (3)

In sum, then, Ken Starr unquestionably has longstanding connections to Churches of Christ, but the current status of those ties seems somewhat more ambiguous.

Thanks for reading, and check back in two weeks for a multi-part entry on Alabama governors with connections to the Stone-Campbell Movement!

(1) Beckie Supiano, “Love Him or Hate Him, Ken Starr Will Try to Unify Baylor: His ‘outsider’ status could help or hinder,” Chronicle of Higher Education, May 16, 2010, accessed September 9, 2018, https://www.chronicle.com/article/Is-Ken-Starr-the-Man-Who-Can/65546/?key=HDpzclBsYCcYZyY1f3ZEcitVbHYtJkstOykVMygabVlS.