Hello and welcome to the “Church of Christ Celebrities” blog for our second presidential post! As you know by now, likes, shares, and topic suggestions are greatly appreciated; it’s always nice to hear back from readers, and the more suggestions I receive, the more entries you’ll get to read.

As mentioned above, today’s short entry is our second to focus on a president–in this case, not a U.S. president, but a Kid President. Robby Novak (2004-) is best known for playing the Kid President character in a series of videos for Rainn Wilson’s SoulPancake project. As a result of going viral, Novak/Kid President has gotten to travel widely and was even invited to visit with President Barack Obama in the Oval Office back in 2013. Here’s a sample video in case you’re not familiar with the series, or in case you just need a pick-me-up today:

The process of writing an entry for this blog usually takes me through some basic biographical research on the subject du jour, followed by a more thorough examination of the sources related to that person’s religious affiliation. Today’s post will be a good bit shorter, however, since the biographical (or “biographical,” as the case may be) information will give away the answer up front.

The “Kid President” character was originally created by Novak’s brother-in-law,  Brad Montague, as part of a promotional effort for the 2012 Freed-Hardeman University benefit dinner featuring Condoleezza Rice. Given that FHU is associated with Churches of Christ, of course, you might immediately suspect some sort of connection between Novak and Churches of Christ; if you did, you would be correct. (1) A 2014 profile in the Christian Chronicle reveals that both Robby and his sister Lexi were adopted into a family which attends the Estes Church of Christ in Henderson, Tennessee. (2)

For the second post in a row, then, our subject for today is CONFIRMED. Although today’s was a very short entry, check back in a few weeks’ time for a longer post as we touch on each of the three U.S. presidents with direct connections to Stone-Campbell related churches. See you then!

(Oh, and here’s a picture of Kid President with another featured “Church of Christ Celebrity” from weeks past: “Weird Al” Yankovic!) 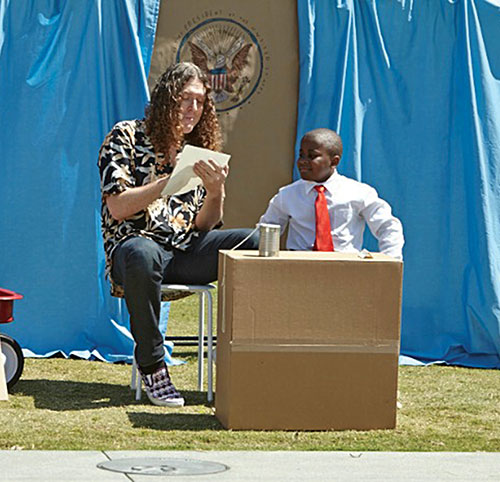